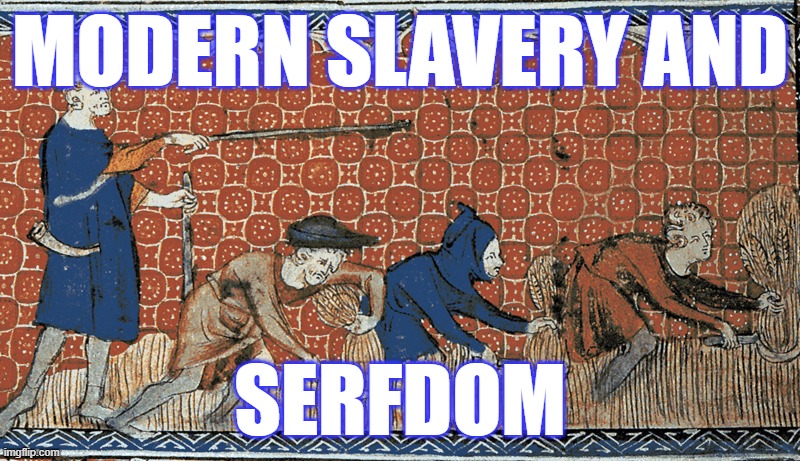 People are under the impression in the modern world that slavery has been abolished.

They believe that the past was an awful place, where people exploited others and are extremely thankful we don’t live in such backward times.

They have no idea the insidiousness of their own situation.

The truth is that the world NEVER moved away from slavery or serfdom, it simply rebranded them.

The truth is about to hurt, massively…

Here is the definition of slavery:

Slavery is condition in which one human being is owned by another. A slave was considered by law as property, or chattel, and was deprived of most of the rights ordinarily held by free persons.

Basically, under slavery, certain people were not considered human and were exploited mercilessly, sometimes to the point of death.

Slavery is a terrible thing.

The textbooks say that slavery was abolished in the west in around 1865.

It never truly was.

This is the definition of serfdom:

Serfdom was a form of agricultural servitude that most of Europe had left behind in the medieval period. Medieval serfs (aka villeins) were unfree labourers who worked the land of a landowner (or its tenant) in return for physical and legal protection and the right to work a separate piece of land for their own basic needs.

Emphasis on the “was”.

Our current history textbooks talk about the terrible situation that both slaves and serfs experienced, making ABSOLUTELY NO MENTION of the current state of the world.

This is done on PURPOSE.

We, the people, do not have access to the truth.

Instead, we are fed pretty lies, bread and circuses.

Here is the REAL state of the modern world…

The State of the Modern World

Our modern world is one of slavery and serfdom.

Nothing has changed practically for the average person in the last 1000 years other than modern medicine (which has increased the lifespan of the average slave/serf).

The majority of the human population in the west still serves at the behest of their king (the corporate oligarch who rules them).

The average person barely has a break and is forced to bow to the whims of their master.

They are expendable and replaceable, living a life of quiet desperation.

Something else has changed.

In medieval times, the average person knew they were a slave/serf.

Today, the average person has NO IDEA the TRUE situation they find themselves in.

Only an enlightened few have that privilege.

Bread and circuses keep the average person occupied while the world mercilessly exploits them.

A person that is forced to work in order to be able to live in a ratty apartment is a modern day slave.

People that live paycheck to paycheck have barely any more control over their life than a slave did in ancient times.

Their whole lives are consumed by the acquisition of a paycheck.

This paycheck is the absolute lowest possible quantity of money an individual can be paid to continue to be motivated to work while remaining a slave to the corporation they work for.

These are the so-called “lower class” of our society.

Some would also argue that prisoners are modern slaves, as they often work in sweatshop-like conditions in order to earn money (literally pennies on the dollar) so that they may buy shitty commissary items (at a gigantic markup).

In a way, many prisons follow the same system that slaves of the past followed (look up indentured servitude).

A person that works for a corporation, having only two weeks paid vacation a year is a modern day serf.

They live SLIGHTLY better than slaves, but not by much.

The work that they have to do is also much more stressful as well.

No matter how “fulfilling” such a job is, it is still FORCED WORK for 5 days of the week, for 50 weeks of the year.

The modern day serf is what the politically correct would call a member of the middle class.

The truth is that they really aren’t part of a middle class at all.

They have not much more freedom than a slave.

What difference does it make whether you have a nice house and a nice car vs. a shitty house and shitty car if you lack time in both situations?

One of these two options is just more comfortable slavery.

The serfs serve at the behest of their oligarch just as the slaves do.

They simply have nicer rooms.

The Brainwashing of the General Population

The general population is under the impression that we live in some kind of free utopia, where all of the evils of the past have been resolved by modern ideas.

This is patently false.

The population is brainwashed from a young age to believe these ideas, as being a passive follower prevents any changes to the underlying power structure put in place by our rulers (corporations).

The life of the average person matters NOT ONE IOTA to a corporatist oligarch (or any king throughout history, really).

The only time any king considers the lives of the average person is when their position is personally affected (in modern times, this would refer to how much money they make/lose from the general population).

It pays therefore (or rather prevents the loss of money), to train the average person to be a good wage slave/follower/beta/NPC.

How is this done?

If you teach children from a young age to be obedient wage-slave types, they will never rise up to oppose your rule.

The corporatist oligarchs can then rest easy, knowing that they will always have a subset of the human population pre-brainwashed to make them money!

This is the real reason why public education has fallen in quality over time.

The less educated the populace is, the better corporations are at draining their potential in order to enrich themselves.

Feminism has taken hold of many of these institutions and the curriculum of many classes has changed to teach cultural Marxism rather than the things that are truly important (such as the scientific method or objective, rational thought).

It is more important for people to “get good grades” nowadays in institutions of higher learning than for people to actually learn what the world is really like and to draw conclusions for themselves.

Expect the future to become plump with uneducated idiots as even the average university student remains a blind idiot despite multiple years of education.

Such is the result of learning information but failing to gain any wisdom.

The Truth Will Set You Free (And Burn Along the Way)

Now that you know the real way the world works, don’t you think it’s time you started to think for yourself?

Don’t just do what your parents/teachers/society tells you is correct.

They have other aims for you than your happiness.

Both society and the matriarchy desire your slavery.

Neither have your best interest at heart.

To them, you are a useful fool.

It is up to you whether you allow yourself to be put in such a position.

You might want to consider learning how to decouple your earnings from your time.

This will take years of practice and will likely distance you from all of the beta/slave/NPC friends you have.

You can escape though.

It simply comes at a cost, one most people are unwilling to pay.

As you can see, not much has changed about the state of the world in 1000 years.

Even though we are supposedly enlightened and all of our problems have disappeared, we still live in a world of slavery, serfdom and oligarchs.

It is up to you to decide if you will be one of the slaves or a free man.

The opening of your mind is the first important step to freeing yourself from your mental prison.

Don’t let the programming that has insidiously entered your brain since birth decide your fate.

You are a thinking, reasoning man!

Fight for your freedom!

Take control of your life and stop sacrificing yourself for others’ needs.

Be wise, fierce and independent!

Helios, This Is All Conspiracy Theory Garbage, You’re Literally A Quack!

Are there or are there not sons of the owners of corporations who are born with so much money they could spend it recklessly for their whole lives and never see the end of it?

THAT is a PRINCE, not the son of a businessman.

Are there people with so much money they can control the political leanings and decisions of entire countries?

Those are KINGS, not businessmen.

Are there people, employed by businesses who are paid MUCH LESS than they are worth in order to enrich people higher up in the business?

Those are SLAVES/SERFS, being taken advantage of by the KING AND HIS COURT, not a business!

Can you not see that the ideas of the past have simply been repackaged into a new form?

Then you are lost.

I’m Not A Slave, I Have Access to More Information Than the Kings of the Past, You’re Full of Shit!

You also have much more MISINFORMATION than ever in history.

Our modern dark age is caused by PURPOSEFUL OBFUSCATION of correct information.

If you cannot see that, I’m afraid you need to work on your critical thinking skills.

Oh wait, your educational system failed you and you have no critical thinking skills, right.

My Mom is a Teacher, How Dare You Say That Public Education is Terrible!

Individuals can be extraordinary.

I don’t deny that.

You can’t deny however that the SYSTEM your mom is in has cancerous ideas that she is FORCED to teach, even if she DOESN’T PERSONALLY AGREE.

Even if she doesn’t teach them, she certainly can’t oppose them.

I’m talking about the following:

I’ll Have You Know That I Went To Yale, And I’m Smarter Than You’ll Ever Be! You’re Plebeian Garbage!

Please refer to the following link for what I think of modern higher education institutions:

https://oyc.yale.edu/english/engl-300/lecture-20 (It is a link to an open feminism course)

If they encourage thoughts like that, I’m afraid your beloved school is lost (pay close attention to this sentence, since I know your reading comprehension is probably not where it should be, despite the institution you went to:

“The logocentric approach to gender theory, specifically the task of defining female language as something different and separate from male language, is considered alongside Woolf’s own endorsement of literary and intellectual androgyny.”)

Don’t be like them, actually think for yourself and not about how to destroy the lives of men.

By the way, you believe you’re superior because you were brainwashed at a place that costs 50,000$ per year?

Unless you are free from the shackles of modern slavery, you have NO RIGHT to speak to ANYONE about superiority.