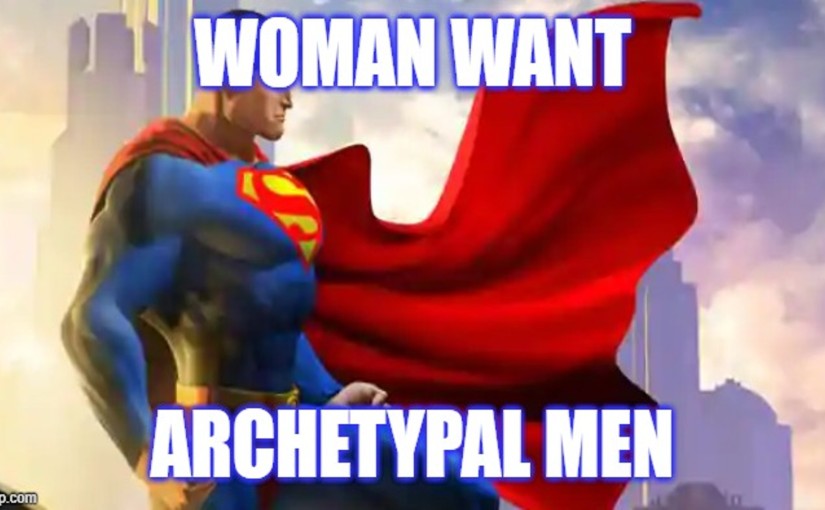 In many ways, they are more real than reality.

They concentrate the innate truths of the world into an easily recognizable form and present it to us.

I’m going to talk about how women are not looking for any real man, but an archetypal man (like one from a story).

Let’s get on with it, shall we?

What is an Archetypal Man?

An archetypal man is a man that represents the “stereotypical” qualities of an alpha, but in super form.

They are present in stories and serve as role models for us real men to aspire to.

Here is a short list of archetypal men (to illustrate the point):

All of these men are not real, but they are definitely alpha, and also alpha in different ways.

There are many archetypal men in pop culture that women are extremely attracted to.

No person in real life is as smooth, scripted, cool or evil as any of these characters.

No person in real life is as attractive as any of these characters either.

Women want men like in the stories, not real men.

There is NO REAL ARCHETYPAL man.

No man is ever able to achieve what Thor can in the movies, for example.

There are many men who are very attractive and give the impression of a man LIKE Thor, but they AREN’T HIM.

It is interesting to note that the ancient Greeks spoke of this.

They said that in attempting to be like the gods, men worshipped them (in terms of their bodies, effort, attitudes, etc.).

Women want men who are best able to embody one (or more) of the qualities of archetypal men.

I believe that the most attractive men in the world are those that are best at maintaining the illusion that they are an archetypal man.

They have such frame that they neve dissuade a girl from the notion that she is with an archetypal man.

Thus, actors are incredibly attractive, if they direct their acting ability properly.

What this means for you, is that you should attempt to embody the qualities of one (or more) archetypal men and NEVER perform actions that dissuade women from the notion that you are one of these men.

What Kind of Sex Does An Archetypal Man Get?

Of course, an archetypal man gets the most amazing sex in the world.

They are able to actually satisfy a woman’s hypergamous urge (temporarily) to be with a superhuman.

No man is truly an archetypal one, but some are able to convincingly create the illusion and temporarily access this crazy sex.

Obviously, also due to hypergamy, all relationships are time limited, but a man that is capable of projecting the illusion of an archetypal man can temporarily access the benefits.

Once hypergamy realizes that you aren’t the archetypal man, it moves on to a new target, one who might be.

This is also the reason why familiarity breeds contempt.

As a girl learns more about you, she realizes you aren’t Achilles, and looks to find him elsewhere (even though Achilles can’t ever truly be found)

How To Maintain the Illusion

The way to maintain the illusion is through aloofness and mystery.

Rather than giving away all of the things you are capable of, hold back.

Reveal all your talents in a trickle rather than a torrent.

Don’t text her except for logistics.

Give her mind as much room to fantasize as you can.

This will allow her to maintain the illusion for you.

What Betas Do Instead of Maintaining Illusion

Rather than maintain the illusion of the archetypal man, the beta will give away all of his time, attention, affection and abilities immediately.

The woman quickly realizes who she’s dealing with (someone who isn’t Gilgamesh) and she quickly grows tired of him, as she realizes that she could have settled for Gilgamesh but got this imperfect human instead.

She then moves on to a man who is better at maintaining the illusion that he is Gilgamesh (an alpha).

The mental is much more important than the real for women.

Keep that in mind.

Why All Relationships Are Temporary

The real reason why all relationships are temporary (especially LTRs and marriages) is because women get to know EVERYTHING about their partner.

They initially thought the man they were with was Khal Drogo.

As they learned more about him, they realized that he wasn’t as impervious as they thought.

He quickly became a man, and not the archetype

She’ll then go looking for a superior man, one who is better at maintaining the illusion that they are Khal Drogo.

Relationships are temporary BECAUSE of hypergamy, which determines very quickly in LTR/marriages that any partner is not superhuman, but a man with weaknesses.

Hypergamy then goes looking for a man without weaknesses, on a never ending quest to find a perfect man who doesn’t exist.

Women are not interested in men at all, but male archetypes.

They want a superhuman.

Hypergamy is endlessly dissatisfied by a regular man and seeks a super man.

Alpha men are simply those who are better at maintaining the illusion that they are archetypal.

All relationships are temporary because no man is perfect and his perfect archetypal image is bound to crack with time.

What Is An Archetypal Man?

A superhuman from stories.

These are the men women are actually looking for with their hypergamy.

There is NOT ONE man on this Earth who is an archetypal man, and thus hypergamy is never satisfied.

Who Are the Most Attractive Men?

Men who are best at maintaining the illusion that they are an archetypal man are the most attractive.

This also means that relationships are doomed to end as the truth is discovered (he wasn’t Thor after all? Damn!).

Which Men Get the Best Sex?

Men who temporarily satisfy women’s hypergamous urge (by embodying an archetypal man) are those who get the best sex.

Women temporarily believe that they are with a superhuman, and thus their hypergamy is temporarily satisfied.

This sex is bound to end when she realizes that he wasn’t a superhuman after all, but a regular man with weaknesses.

How Do Betas Relate to All of This?

Betas basically instantly roll and show their weaknesses and all of their abilities.

As a result, women get an instant hypergamous assessment that tells them that this man is not superhuman.

As a result, women NEVER experience attraction for these men.