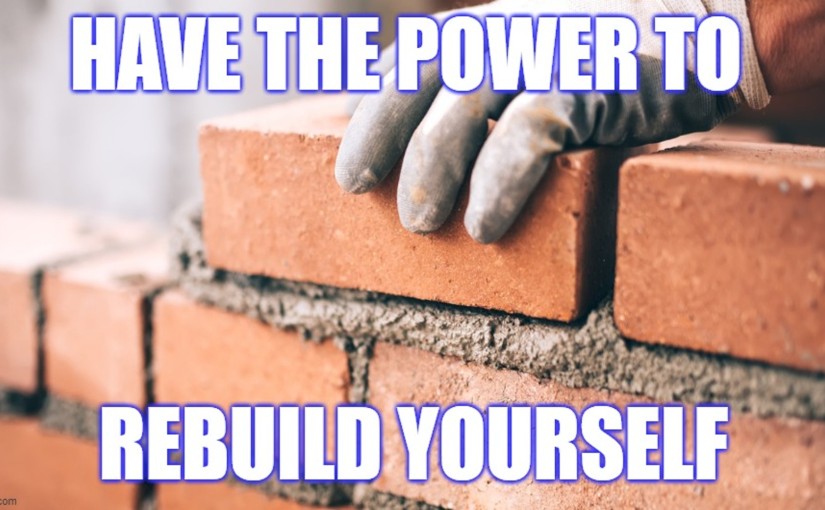 Our modern world is in a time of transition.

It is necessary to change with the times or be swept by them.

I’m going to talk today about why rebuilding yourself is so important in the modern world.

The modern world cares barely at all for the modern man.

There are pitfalls everywhere, set by the feminine imperative.

They set these traps in order to control you and direct your destiny for their own benefit.

There is misinformation everywhere, aimed at confusing you.

The misinformation dark age is there to prevent you from accessing the truth.

You are to believe falsehoods so that you can walk a false road and serve a false master.

It is your decision whether you change yourself or allow yourself to be destroyed by the modern tidal wave.

Ultimately, the life of a man is a trial by fire.

You win, or you die, destroyed by your own decisions.

Life is going to set many challenges in front of you, many of them masked as “milestones”.

If you meet the milestones life has set for you, without questioning why these are supposed milestones, you’re going to have a bad time.

Life has set a path before you to follow (the traditional life path) that favours women.

It is set up so that you can sacrifice yourself for their benefit.

If you follow this path unwittingly, you will be sacrificed and your name will be forgotten.

You will end up in the pages of history as just another man who was chewed up and spit out by the matriarchy.

Your trial by fire is waking up to see reality.

Betas live a life of slavery.

From a young age, they have been raised to be good servile boys for women.

They are raised for failure, that natural selection may take its course and select the best of them for reproduction.

The rest are used and abused to facilitate a feminine primary reality.

Only the men that see the mental prison for what it is can truly break away from it.

You make that choice for yourself.

Understand the Truth and Rebuild

Once you understand the truth of the cage you have been raised to live in, you cannot go back.

You begin to understand that life did not have your best interest in mind from the beginning, and the things you were doing were valueless except as they related to your sacrifice for women.

You learn that you were a lamb bred for slaughter.

It is then time to rebuild.

With the understanding of how the world really works under your belt, you need to work to transform that sheep into a wolf.

Do not allow the world to steamroll you.

Change your paradigm and shift your world to be in your favour.

It’s Not Over Until You Win

Ultimately, the reforging of your personality will not happen overnight.

As the saying goes, Rome wasn’t built in a day.

You need to persevere until victory is in your grasp.

The power to succeed lies within you, if only you were strong enough to grab hold of it.

You are in fact the hero in your story, you were just too afraid to let yourself be.

Fight For Yourself, No-one Else Will

Ultimately, it’s your job to fight for yourself.

I can give you knowledge, but I cannot give you the iron will needed to stand strong against the tide of society that wants you to bend to its will.

You need to stand apart and stand fierce.

A man stands up for himself and fights for what he believes in.

A man does not allow himself to be a lamb, raised to be killed, having accomplished nothing.

You’re worth more than that.

The Strength to Stand Apart

Have the strength to stand on your own two legs.

You will never be happy living the life that was prescribed to you.

I’m sure you know that, and the splinter in your reality is what made you seek out my writing.

Stand strong, stand apart, and you will be rewarded with what men truly want.

Alphas are Made, Not Born

It is a lie that alphas are born.

To be alpha is a choice.

Rather than meekly submit to the will of those around you, you choose to stand strong.

Rather than surrender, you choose to fight.

Rather than obey, you choose to think for yourself.

You allow yourself to be strong and independent.

When you live on the edge of your fear, you are alpha.

You must have the power to rebuild yourself.

The world is set up to freely allow your sacrifice, but you must not let the false teachings of modern society destroy you.

The clever traps set up in front of you are just webs designed to allow the matriarchy to drain your masculine essence for its benefit.

You are worth more than that, and should fight to stand independent of what society has deemed is the “right” thing to do.

When the “right” thing to do is to burn yourself at the stake, no options remain but doing the “wrong” thing.

What Does the Modern World Want From Men?

They want the utter destruction of masculinity for the benefit of femininity.

They want alphas to struggle and break free of their chains in order to breed with the modern amazons.

The modern world does NOT have the best interests of men at heart.

Who Are the Most Attractive Men?

Men who fight against their mental prison are the most attractive.

Men who refuse to bend to the will of the matriarchy are alpha.

They receive true love, attention and affection from women.

What Is the Average Man In Our Society?

A useful idiot, whose masculine essence is used to fuel the matriarchy’s goals.

In many ways, they are not men at all, but dogs trained to jump for women.

If you continue down your current path, yes.

Alpha is a choice, luckily for you.

Once you decide to cast off your chains, the mental prison can do nothing to stop you.

You will experience true freedom for the first time.