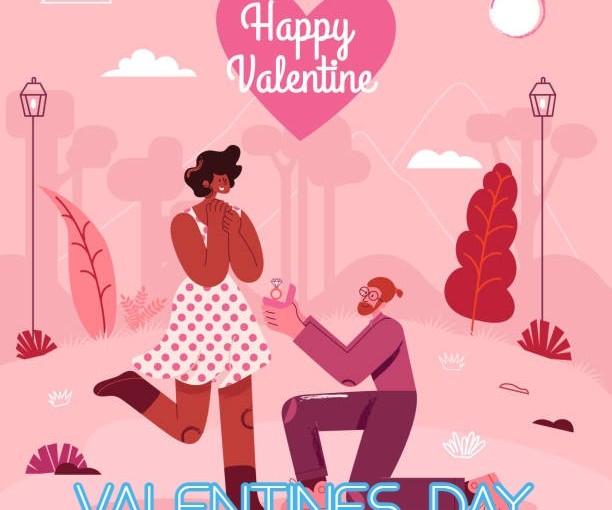 Valentine’s day is a really shitty part of the year.

For women, it is shitty because they are reminded of other women who are better (at subjugating a man) than they are.

For men, it is shitty because they have to reaffirm their love (slavery) to a woman.

You’ll see what I’m talking about…

Valentine’s day should be called by its true name: Male subjugation day.

You see, it isn’t enough that men are already at the whim of a woman in a committed, monogamous relationship.

Men also have to reaffirm their worship of their one special woman once per year, on male subjugation day.

On this day, men must totally prostrate themselves before a girl and buy her something to show how much of a slave he is.

He then gets the privilege of being compared to the other slaves.

If he hasn’t done a good enough job showing how good a slave he was that year, no duty sex for that month!

As I alluded to before, it isn’t enough that women have total primacy over our culture, they have to rub it in our faces with one specific day where they can be overt about how badly they have won the culture war.

It is a gigantic insult to masculinity everywhere that such a day should exist.

Men should never have to prostrate themselves before anyone, let alone their sole sexual partner, who they’re providing so much to already.

Being forced to do this by feminine culture is truly adding insult to injury.

The only way I can imagine this holiday as being any more shameful to betas is if they were forced to wear something garishly embarrassing.

That a man would EVER agree to the socially accepted conventions of valentine’s day is an affront to masculinity.

A true alpha would NEVER beg for the affections of a girl like valentines day implies men should.

It is TOTAL cultural brainwashing.

It is made to convince betas to compete over how good a doormat they are.

Just by entering into the competition, you are labelling yourself as a gigantic LOSER.

It’s hilarious what a shit test this day is.

It’s also fucking embarassing how many men fail it.

As I’ve said before, you cannot buy women’s love.

No amount of lingerie-buying or chocolate gifting will make that girl want to fuck you.

In fact, trying to buy love DIRECTLY goes against what you should be doing.

Want to get laid on valentine’s day?

Don’t buy your wife ANYTHING.

When she complains, agree and amplify, or deflect.

That annoyance/rage she feels because you refuse to bend might just get you laid.

Combine it with the truth:

And you might just have a magic “get-laid” potion!

You are a MAN, you DO NOT bend because some stupid social convention tells you to!

People that believe that giving gifts on valentines day will get them laid are the same kind of men who believe that choreplay is attractive.

Both of these activities have the OPPOSITE effect.

You are NOT a slave.

You need a masculine-feminine polarity in your relationship in order to get laid.

This means that the man has to behave in ways that are worthy of respect.

If he fails to do so, he fails to be respected as a man, and sex drops to zero as a result.

If You Have to Convince Her, You’re Beta

If you have to logically convince your wife to fuck you, you’re a beta.

If you have to buy her things for her to fuck you, you’re a beta.

If she constantly makes excuses for why she won’t fuck, you’re a beta.

If you’re constantly kissing her ass (the way society implies you should on valentine’s day), you’re a beta.

Attraction is NOT a logical thing for women.

Women are NOT men.

What Most Men Think Women Want

This is what women teach men that they want from a young age.

If you listen to these things and give them to women freely, you’re a beta slave.

You have learned nothing.

Pay attention to who women fuck and you’ll get an idea of what they really want!

If you foster even two of the following qualities in yourself, you’ll see a remarkable increase in the amount of sex you’re going to have.

Notice how NONE of the things on this list include buying her chocolates on valentine’s day!

I also hope you notice that most husbands (or boyfriends) embody NONE of these qualities (or maybe one).

You cannot buy the visceral, animalistic attraction that women have for alphas.

That has to be forged in you through struggle and pain.

You will NEVER achieve that by subjugating yourself.

Do not supplicate to her by following shitty cultural trends that enforce weakness and ass-kissing in men.

Valentine’s day is to be avoided at all costs, go it?

As you can see, Valentine’s day is terrible, in that it enforces the cultural stereotype of male subjugation for implied intimacy.

Obviously it not only doesn’t work, but further screws over the man in the arrangement.

Valentine’s day is a cruel insult to injury for betas.

Do not follow cultural trends that encourage men to be doormats.

It hurts everyone in the long run!

Valentine’s Day is Coming Up, Should I Buy My Girlfriend Something Nice, or Is That Too Beta?

Having a monogamous GF is already beta.

Now you want to buy her shit on subjugation day too?

Are you kidding me?

Have you read any of these posts?

I Love My Wife, are You Saying I Shouldn’t Buy Her Flowers? Asshole!

Is it beta day or something?

Why are you monogamously married? In 2021? Are you retarded?

And you’re buying her flowers too.

Jesus, there’s no saving some people.

Go chop your balls off bro, there’s a cleaver right there.

I’ve Always Thought Valentine’s Day Was Stupid, Is It?

It’s not only stupid, it reinforces that women are in power.

It’s just a day for women to compare purses(husbands) with each other.

The first girl will then get jealous and deny her butler (boyfriend) sex since he didn’t do a good enough job being a butler and the cycle continues.

NPCs have such amazing lives don’t they?

My Wife Only Sleeps With Me On Valentines Day and On My Birthday. I Have to Work Hard to Convince Her I Need Sex. Help!

You’re in a dead bedroom because you agreed to get into a monogamous arrangement with your wife where you’re cohabitating.

Now she has your balls in a vice and has to do absolutely nothing to keep you around.

You’re more of a dog with cash around his neck than a man to her at this point.

She has to feed you once in a while.

She just feels that if she has to feed you more than twice a year that it’s too much.

If you don’t, give her half your money!

That’s what you get for marrying anytime after 1980.

The law is also on your wife’s side.

She can treat you like a dog and you can’t do anything!

I’m so jealous by the way.