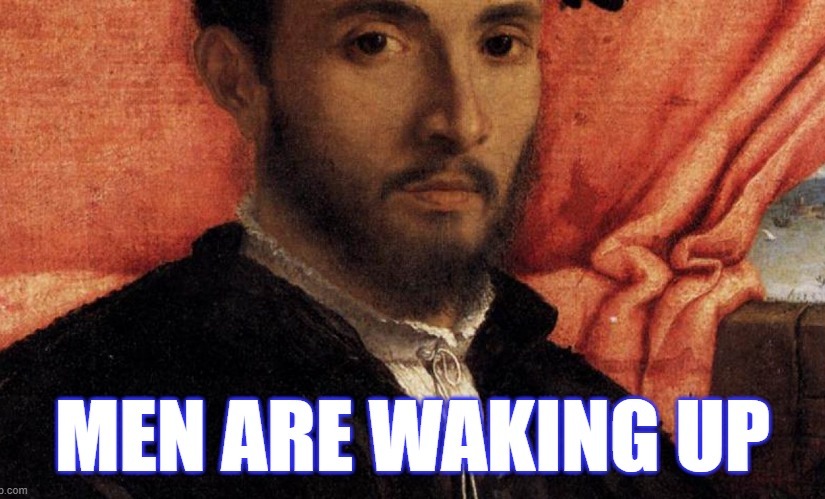 This has not been discussed before on my blog, and I think we should talk about it a little.

I believe that men are on the cusp of a neo-renaissance.

The original renaissance gave birth to what the west is today, and recently (for the past 60 years or so), there has been a dark age.

Men are waking up from it, in surprising numbers.

First, a bit of background.

Let’s begin, shall we…

The original dark ages occurred after the fall of the roman empire.

In the “Dark Ages” the keeping of records was greatly reduced.

It also marked the greater Christianization of the western world and a decline in rational thought.

Though the term has fallen out of favour, I’m sure you already see parallels between the dark ages and the modern era.

We have currently moved away from rational thought and towards cultural marxism and an egalitarian, matriarchal society that worships women.

After the “Dark Ages”, there was a so-called Renaissance (rebirth).

This Renaissance happened when men discovered ideas that had been forgotten since ancient roman times and re-interpreted them in a new context.

Some of the greatest minds in all of human history appeared during this time (such as Leonardo da Vinci).

During the Renaissance, people once again began to focus on rational thought and this snowballed into modern medicine, and the scientific revolution.

In many ways, we owe a large part of our western world to this time period in human history.

Of course, the wheel of time turned, and a return to darkness was inevitable.

What Does It Mean That We Are In A Modern Dark Age?

Nowadays, with the death of religion and information so interconnected and widespread, you wouldn’t think that it would be possible to have a dark age, but here we are.

Rather than information not being available nowadays, information is PURPOSELY hidden in piles of trash.

Valuable information becomes impossible to find when it is literally a needle in a haystack.

The truth of how the world works is hidden behind an active smokescreen.

This smokescreen keeps beta men in line, sacrificing themselves for the matriarchy at the expense of their livelihoods and happiness..

We are currently in a dark age because most men have no idea the real way the world works and how they have been manipulated for so long to serve the needs of the matriarchy.

What is the Neo-Renaissance?

The neo-renaissance refers to a time (in the relatively near future) when the average man (not just we enlightened alphas) understands how the world works.

The average man will understand exactly what has happened to him and why he was a pawn in a women’s grand game.

He will then apply that knowledge to better his own life, rather than sacrificing it for the aims of someone else.

When the average man understands that going his own way is the correct way, we will have a true neo-renaissance.

A rebirth in understanding and a paradigm shift in male-female dynamics.

The social and political upheaval that will be caused as a result of the neo-renaissance is going to be massive.

What Does it Mean to Be a Neo-Renaissance Man?

A neo-renaissance man does not have his life controlled by the whims of others.

He understands what his role was in paving the way for feminine supremacy and chooses to stand apart from that.

He focuses on a rational, stoic approach towards life that favours him as an individual.

He is independent and able to think for himself.

He is not a slave to women, or society.

A neo-renaissance man understands his value and actively works to cultivate it.

What Skills Does A Neo-Renaissance Man Need?

He needs to know how to take care of himself, physically, mentally and spiritually.

He needs to be well read and understand history, so that it may not repeat itself for him.

A neo-renaissance man needs to be valuable in multiple ways, so that the world does not decide his direction for him.

A neo-renaissance man needs to cultivate multiple options in his business, social and sexual life.

A neo-renaissance man needs to understand that he is a valuable, rare individual who is worth working on.

What Ideas Are Important to the Neo-Renaissance?

The most important ideas to the neo-renaissance are the throwing away of modern feminist thought and cultural marxism.

Specifically, it means to discard the following ideas:

Once these cancerous ideas are thrown away by the average man, the world will realign itself to a new normal, one where women do not have sole dominion over the fate of beta men.

The average man will be free of slavery once the average man understands that those ideas above are the result of cultural programming, rather than reality.

How Red Pill Ideas Fit Into the Neo-Renaissance

Red pill ideas refer to understanding what the real world is like and what women are truly attracted to.

A neo-renaissance man, who throws away his women-worshipping ideas can much more easily fit into a new paradigm of behaviour where he can be attractive to the women that he has always wanted to sleep with.

Once the average man understands what the real world is like and what women are truly attracted to, he becomes truly competitive in a way that was impossible before.

The average man will raise the standard for all of humanity.

Humans as a species will forge ahead ever stronger, as the competition for women becomes MUCH more fierce, but also MUCH more fair.

People will not be born into slavery for the female cause.

Women will also have to adapt to this new situation and be much more convincing in order for men to want to be in relationships with them.

The Reclamation of Power Through Knowledge

Effectively, once the average man learns the truth (and not just an enlightened group of individuals), men will have reclaimed power from women.

Relationships will be a much more egalitarian prospect, as men understand what women are really like and use their logic and abilities to their advantage in order to secure what they desire from women.

Men will no longer be slaves to the matriarchy, and put into mental prisons from birth.

Natural selection will still happen, but the average man will have a chance at happiness.

Men will no longer be churned by the grinder of divorce as the average man understands exactly why women enter into those kinds of relationships in the first place.

Takeaways From the Neo-Renaissance

As a result of the neo-renaissance, the world will be tumultuous.

After the upheaval, however, the world will settle into a much fairer place for men.

Women will no longer enjoy the worshipped status they have today, but they will still be respected for who they are as human beings.

Average men will have a chance at true happiness again.

History tells us that the truth cannot be hidden forever.

In the same way that people learned that the Earth revolved around the Sun and now the average 5 year old laughs at anyone saying otherwise, the average person will know women’s true nature in time, and the paradigm shift of the world will be similar.

Brace yourselves, the neo-renaissance is inevitable.

In the same way that there was a dark age previously, there is one now.

The difference is that this dark age is one of obfuscation, rather than lack of records.

The truth of how the world really works and what women are really like will be revealed in time to the average man.

Once the average man understands what we enlightened few do, the neo-renaissance will have begun in earnest.

The world will never be the same once that happens, much as it changed once we learned that the Earth orbits around the Sun.

Be wise and judicious.

Prepare for the coming cultural tide!

I Know How Women Work! If You’re Nice to Them, Communicate, and Keep Them Happy, They’ll Make You the Happiest Man In the World!

Please come to the light.

Read EVERY post on this blog and try to internalize the concepts here.

You will die miserable thinking those thoughts…

Don’t say I didn’t warn you.

What Is the Neo-Renaissance?

It is when the average man understands red pill concepts.

When the average man understands how men have been used and abused as pawns, the paradigm thought shift necessary will have occurred.

This paradigm shift will make the western world realign to a new, more egalitarian normal.

Men Are Powerful, What Are You Saying? Helios, You Don’t Know Shit About Shit!

If you believe thoughts like “happy wife, happy life” you’re not powerful.

Helios, This Is A Pipe Dream! We’ll Never Get to A Point Where the Truth of Female Nature is Known to the Average Man!

People used to take it AS A FACT that the Sun revolved around the Earth.

If they could accept that the Earth rotates around the Sun, they can accept the fact that women are dicks to men if you let them.

It’s not NEARLY as far-fetched.