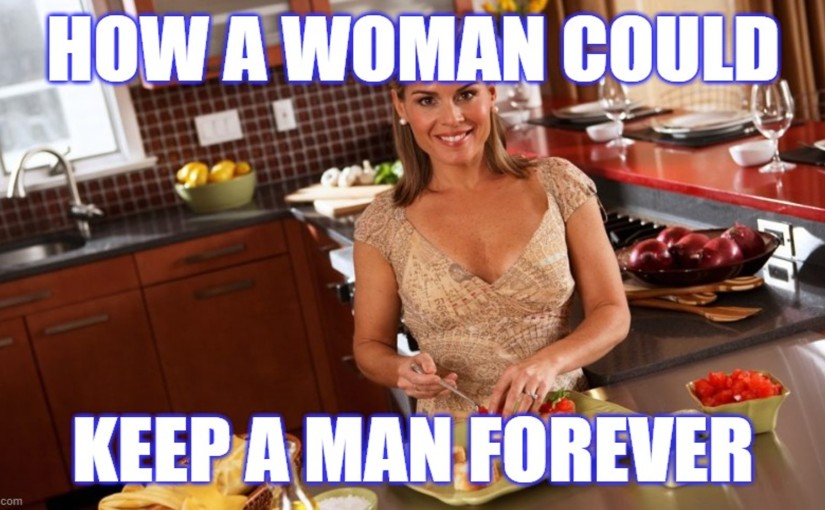 Today I’m going to write an article for women.

This article will talk about what women could do (but won’t do) to keep a man forever.

It’s going to be a simple list of things men want (that women tend to NEVER give them).

Women nowadays believe that doing anything for the benefit of men is oppression, and so, there is a giant rift between the sexes.

Women have FORGOTTEN, or are PURPOSELY being taught to NOT do the things men like (due to the power games the matriarchy is playing) to the detriment of both sexes!

Appealing to women’s reason won’t work, but I hope that this article will be read at some point in the future by someone, when the world is even deeper in the shit, and they will realize that we men knew what was wrong (the enlightened ones anyway), but women still didn’t do their part.

Most women nowadays have NO IDEA how to cook.

They believe that learning how to cook is oppressive and that “traditional” feminine things are evil.

Believe me when I say that one of the MOST ATTRACTIVE things a woman can do is cook well.

To some men it is even MORE attractive than being good in bed.

It really isn’t that hard to be able to cook.

Men don’t require you to be a professional chef, but having some cooking ability is INCREDIBLY attractive.

This includes baking by the way.

Try it for yourself and see your results soar with men in relationships!

Want to set yourself so far above your competition it’s ridiculous?

Try cleaning ANYTHING in your partner’s house/apartment as a woman.

Your man will be EXTREMELY surprised that you are so thoughtful and will DEFINITELY return the favour.

I’m not saying be your partner’s maid, but showing you have good housekeeping skills is RIDICULOUSLY attractive as well.

A woman who can cook and clean and has her weight handled is so far above her competition it’s like she’s playing a different game.

This should go without saying.

Most men (betas) NEVER have the opportunity to have this kind of sex.

I know you’ll never have this kind of sex with betas, but I’m saying that if you did (which you won’t), you would have a partner for life.

With an alpha, this does not even need to be said.

Women genuinely desire alphas and will fuck them without needing to be convinced enthusiastically.

For women who are lucky enough to be with an alpha, try cooking/cleaning for him and watch what happens.

You’ll be FLOORED by the results.

Many women nowadays believe that since they are in their rockstar phase (18-23), they can act and do whatever they want.

ANY kind of trashy behaviour (like blasting “WAP” for example) is EXTREMELY unattractive.

Men want to relax when they are with their woman, not be harangued and criticised.

Getting into constant psychological fights with your man is the QUICKEST way to get him to check out.

AVOID these classless behaviours at all costs.

If you want to pair-bond properly with any partner for a long term relationship (LTR), you should sleep with less than 5 men in your whole life.

I know this sounds like a ridiculously small number, considering many of you women in your rockstar phase (age 18-23) go ham.

Unfortunately, your oxytocin does NOT CARE about how you feel, or what phase of life you’re in.

You WILL burn out your ability to get close to a guy and this will cause you to resent men if you sleep with too many partners.

Disrespectful behaviour will then follow, as you’re unable to properly appreciate your partner.

Obviously, I would recommend not doing excessive drugs or drinking as a result, as that is likely to inhibit your ability to make decisions.

On drugs, you’re more likely to fuck some random alpha, resulting in burning out your oxytocin needlessly.

MOST if not ALL modern women have FORGOTTEN that men LOVE feminine clothing.

There are NO skirts/dresses ANYWHERE.

ANY woman that dresses in a feminine way (outside of parties) IMMEDIATELY has MUCH greater attractiveness than women who don’t.

Try dressing feminine in public and see what happens! (All the women around you will hate you as they realize how unfair the game is and how much attention you’re getting).

This is a PSA:

Leggings are NOT as attractive as dresses/skirts, even though we see more of your body when you’re wearing leggings.

The fact that you’re proudly displaying your femininity (by wearing feminine clothing) is extremely attractive to us.

7 – Allow Yourself to Be Submissive

Most women nowadays, rather than acting submissive, do the opposite.

They pretty much act as men do, and every conversation with them is a power struggle.

Do you think we find fighting attractive?

If we wanted to be with a man, we would fuck a man!

We want to be with a WOMAN, someone who agrees to play the FEMININE, SUBMISSIVE role in the relationship.

No man is happy in a relationship when the girl is constantly trying to steal the reins for herself.

It is EXHAUSTING to constantly fight in this manner and I have personally rejected MANY women who did this.

An alpha man wants to relax and NOT FIGHT his girl constantly.

He will simply move on to a girl who is less annoying if you do this.

Allow yourself to let yourself be led.

You will be amazed at how much better things go!

One person leads, one person follows.

When the man leads and the woman follows, both people are happy.

When the woman leads, and the man follows, both people are miserable.

Which do you want to be?

Do you want to be miserable just because feminism told you to?

8 – Show Appreciation for Your Man In Ways Other Than Sex

Most women nowadays use sex as a sort of Pavlovian conditioning.

They give sex as a carrot to their beta so that they will continue to do the self-castrating behaviours that their wives think they want their husband to do.

Most women have NO IDEA how to do anything but use sex as a weapon and a reward.

Women are worth MUCH more than a common prostitute.

Women should show appreciation for their man.

Here is a list of ways you could do that:

Most women DO NOT do this (since they are not thinking of their partner at all, but only themselves).

The most annoying thing a man can experience is a tough day at work, only to come home and have his wife complain at him over some trivial nonsense.

NOTHING is more unattractive than nagging (other than being 400 pounds).

If you nag, your days are numbered.

The relationship WILL NOT last.

That is, of course, unless you are with a total beta/NPC/slave man or you’re in a marriage.

If you’re in either of those two situations, you have the man by the balls and can do whatever you want.

Men DO NOT want to deal with nagging.

Even if you feel it’s justified, before you nag, count to 30.

If after 30 seconds, you still think it needs to be said, then say it.

If it is inane garbage, tell it to your girlfriends and NOT to your male partner.

He will not appreciate it, he will hate you for it.

Seriously overweight and obese women have no chance with alpha men.

You MUST maintain a reasonable weight and you must do it for the ENTIRE relationship.

It is TOTALLY unfair to expect your partner to maintain their weight while you let yourself go just because you feel he won’t leave.

I understand that letting yourself go is a power game (obviously if he was alpha he wouldn’t put up with you gaining 50 pounds).

You should NOT be playing power games with your partner like this.

Maintain a reasonable weight and watch how much better your relationships go!

Believe me when I say that if you do even 3 of the items on this list as a woman, you are so far above your competition it is RIDICULOUS (especially if you have your weight handled).

You would be every man’s wet dream if you could do all of the things on this list.

Any guy’s dream girl is one who:

If any girl had all of these qualities (I have NOT met even one girl in my life that has all of these, and I have been with MANY women), men would be falling over themselves to be with her, and men that were in a relationship with her would see her for the treasure she is.

You would be the woman that men fight over (and it would be a worthy contest indeed)..

Of course, I don’t believe that modern women will ever even attempt to try the items on this list.

I put the information out there anyway.

Good luck out there!

What Do Men Want?

Men want a woman with the following qualities:

If you have 4 or more of these qualities, any man is VERY likely to want to keep you around for the long term.

If you have 4 or more of these qualities and you have a reasonable weight, you are INCREDIBLY attractive.

A girl with all 10 of these qualities isn’t a woman, she is a unicorn (and I don’t believe any of you women who claim that you have all of these. Meet me in person and I’ll be the judge of that).

I Believe Women Should Be the Boss In A Relationship

Then you are lost.

You are already doomed to a life of misery.

Don’t say I didn’t warn you.

Helios, You’re Scum, You’re Telling Women to Be Submissive When They Have Been Oppressed for So Long!

We live in a MATRIARCHY.

Women are NOT oppressed and they act masculine and dominant due to the teachings of the modern matriarchy.

You should be ashamed that you’re encouraging women to do things that will make them miserable in the long term.

What a shame you can’t see that.

All the women that do wear dresses in public (not during parties) have you beat!