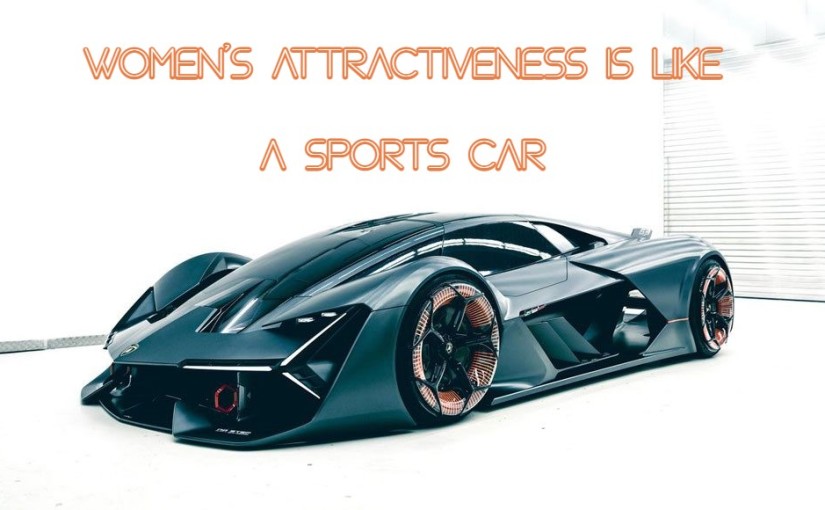 Today we have an uncomfortable topic for some.

I’m sorry to be shattering illusions here, but at the Helios blog, it’s kind of what we’re about.

If you want to live a happy life, you need to know the truth of the world, and women reading need to know as well.

Believe me, the matriarchy does you no favours by lying to you, whether you’re a man or woman.

My truths will not lead to long term misery for you.

Listen and learn, or ignore and be crushed.

It is your decision.

Once it comes out, no man can deny its beauty.

Brand new sports cars are incredibly beautiful and their beauty is undeniable.

Of course, as the sports car is driven around and experiences the stresses of the modern road, it gets worn down over time.

Eventually, it is no longer as beautiful as it once was, and brand new sports cars have appeared that are more eye catching.

If no-one has bought the sports car by that point, no-one may ever buy it.

When Are Women Most Attractive?

Women are most attractive in their rockstar phase (age 18-23).

There is a visceral reaction that men have to young women that is undeniable.

Of course, some women reach their rockstar phase later and some do earlier, but the general rule stands.

It is in this point of their lives that the matriarchy tells women to “explore their options” (fuck as many alpha studs as possible).

Basically, the matriarchy tells women to drive their sports car as hard and fast as they can when it’s new with no regard for the future.

To say this is shortsighted is an understatement.

When Should Women Try And Lock Down A Partner?

DESPITE what the matriarchy tells women, women SHOULD try to lock down a partner when they are at their absolute physical peak (age 18-23).

This is when women are most likely to attract a partner that meets their hypergamous ideal!

That is OF COURSE NOT what the majority of women do in the modern world.

Instead, they sleep around an incredible amount OR waste their time doing other things while not locking down a partner.

Some women even seek a career and leave getting a solid partner to later in their lives.

The matriarchy/women’s upbringing has convinced them that they hold maximum value forever.

Unfortunately, they do not.

The world is totally unfair in this respect.

Women are given an incredible gift, but not for very long.

They need to capitalize on it quickly, or be eternally miserable.

What Happens to Women As They Age?

As women age, more and more women enter the marketplace in their rockstar phase.

This becomes harder and harder as they age until they are totally uncompetitive with new rockstar phase women.

Effectively, they have rented their sports car too long without convincing anyone to buy it.

As a result, no worthy owner is interested in that model of sports car anymore!

They are too distracted by the new models available.

Sadly, this leads to eternal misery for the woman that waited too long to lock down a partner!

These women have waited so long and wasted so much time that they can ONLY get suboptimal, subpar partners who are totally unattractive to them (betas).

They then spend the rest of their lives torturing the beta, when really, the problem was caused by her own poor decision making.

Results of Not Locking Down A High Value Partner Fast Enough

I feel terribly about how I’m about to make some women feel by saying this, but I have to say it unfortunately:

Women NEED to lock down a partner before it’s too late!

Women are VERY unlikely to get a partner that they will be ok with if they wait too long!

When I say women can’t wait too long, I mean that they can’t really wait past the age of 24 to get married.

Women that do generally end up miserable in the long term, as they have been unable to optimize their hypergamy.

Unfortunately, that is NOT AT ALL what society encourages women to do in the modern world.

The matriarchy convinces women to get married around the age of 30.

By that point, they are TOTALLY unable to compete for actually attractive men.

Sadly, this leads to their misery.

Misery in the Modern World

Much of the misery of the modern world is due to the brainwashing of women and betas.

If women were told the truth of their biology and how they would end up miserable by denying it, they would have a much greater chance at happiness.

If betas were told how much they are being used and how underappreciated they actually are, they would understand that they needed to work harder to be masculine.

The Matriarchy Lies to Women

The matriarchy lies to women in an attempt to make them feel good.

The matriarchy tells women that they will be pretty forever and able to optimize their hypergamy forever.

Women that wait too long to lock down a man are on the path of eternal misery.

You have been warned!

At least someone told you.

Appealing to your reason won’t work, but here is my attempt anyway!

Prevent the problem of your long term misery by locking down an attractive man at a young age!

That is the BEST TIME for you to do it!

There is NEVER a better point than in your rockstar phase (age 18-23)!

The matriarchy has lied to you but I won’t.

It starts off extremely valuable, but if it is rented out too long and not bought, it is replaced by newer models.

Women need to capitalize on their value and attract the best mate possible when they are best able to (in their rockstar phase, when they are at peak attractiveness).

If women do not capitalize on the opportunity they have been given, they are unlikely to find true happiness in the long term.

The truth hurts, but is necessary to living a good life in the long term.

When it first comes out of the shop, a sports car is most attractive.

After that, she continuously has to compete with other models until she is no longer competitive.

She has to capitalize on her opportunity before that!

When Are Women Most Attractive?

Women are most attractive in their rockstar phase (age 18-22).

In that phase, women are most likely to meet a partner who meets their hypergamous ideal.

When Should Women Try to Lock Down A Partner For Marriage?

A woman should try to lock down a man for marriage when she is in her rockstar phase (age 18-22).

That is when she is at her absolute peak attractiveness and is most likely to be able to find a guy that meets her hypergamous ideal.

She should not delay much past age 24, if she wants to achieve long term happiness.

What Happens to Women Who Don’t Lock Down A Partner Fast Enough?

They are never again able to optimize their hypergamy.

As a result, they are settling for any guy they do end up with past that point.

Since they have settled, they are incapable of long term happiness with that partner.