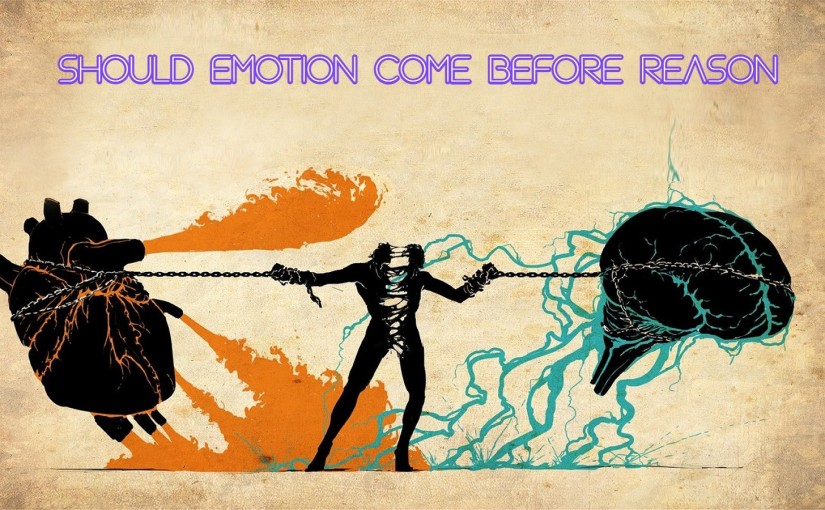 Here is an interesting discussion.

We’re going to talk about whether emotions or reason should be most important.

Today, we live in a world where emotion comes before reason.

I would also argue we always have.

Should Emotion Come Before Reason?

I would argue that emotion should NOT come before reason.

The reason why so many people experience long term negative consequences in their life is DUE to poor logical reasoning and planning.

If more people would use their logic rather than emotion, they would be better served in the long term.

Our modern society does NOT encourage people to think.

If they did, they might realize the terrible conditions they’re living in.

It favours the ruling class to foster ignorance in the population.

After all, the more ignorant a population is, the more obedient they tend to be.

Our modern society is one that encourages ignorance and emotional reasoning.

It encourages split second decisions and basing people’s lives on ephemeral things like “love” and “chemistry”.

There is no thought to the long term, or to the consequences of poor decisions.

Our modern society encourages women to indulge their every (alpha) fantasy while wasting away their most precious commodity (their youth and beauty).

Our society encourages people not to read, study or try hard.

In short, society is all about short dopamine hits.

These things do NOT serve anyone in the long term.

Why Most People Are Miserable Today

The reason why most people are miserable today is because they never think strategically about their lives.

In our modern society, people are so absorbed in their own dopamine hits and short term pleasure, they never think about the consequences of their decisions.

As a result, we get most of the population stuck in relationships they hate, in jobs they hate and slaving away their loves to nothing.

It is not a way to live for anyone, yet we call it normal.

More people should think logically and strategically about how they should live their lives.

If they would do so, they would maximize the positives in their life while minimizing the negatives.

What We Are Taught As Young Children

Since they are taught this way, everyone ends up miserable in the long term.

The only thing teaching people the opposite accomplishes is a reduction in overall happiness and compatibility between the genders.

As a result of this modern day rift, more couples are miserable than ever.

If more people would use reason, they might arrive at the logical conclusion that teaching both genders to be the opposite of what the other gender wants is something that should be discouraged.

The matriarchy does not care about the happiness of either gender.

It only cares about maintaining its own power.

As a result, the matriarchy will continue to teach people to be more emotional.

Teaching men to be rational might encourage all the wrong things, like critical thinking and a bettering of their lot in life.

The matriarchy also doesn’t care enough for women to teach them what they need to know to attract a man they might want.

The matriarchy encourages maximum female freedom and chasing alpha males, while not telling them that they are burning out their ability to pair bond with any male by doing so.

The matriarchy does not tell women the cliff they are headed for, instead they encourage women to run off it full speed!

Rather than following base emotion, I encourage people to use the scientific method in their lives.

Constantly test and be willing to discard things and modes of thinking that aren’t leading to the results you’re looking for.

If more people were to apply the scientific method to their daily lives, we would have much less misery and delusion in the world.

People would know the truth and could use it to better their lives, rather than being told platitudes and failing in following them.

Result of Emotions Coming Before Reason

As I have mentioned before, the result of emotions coming before reason in modern society is that the majority of people (90%) become miserable in the long term.

Most people do not end up in arrangements they want in the long term, and suffer greatly as a result.

Without reason, the world devolves into madness and anarchy.

We are seeing this in the modern dating market as more and more men are pushed out, due to the mental prison they have been locked in from a young age.

Their mental prison encourages them to indulge their emotions, ignore reason and follow the dopamine.

Expect things to get much worse before they get better.

Use What Works, Not What You’re Told You Have to Do

Rather than following the terrible advice given to you by pop culture, your parents, your female friends and your teachers, use the scientific method in your life.

If kissing a woman’s ass didn’t work the first time, what makes you think it will work the next 10 times?

Apply this to everything regarding your relationships and you’ll realize that most things you were taught are utter trash when it comes to getting the results you want out of life.

We live in a society that encourages you to abandon your logic and use your emotions for everything.

Most people live for their short term pleasure, with no thought about what their actions mean for the future.

As a result of their poor choices now, most people (90%) suffer terrible consequences later.

I highly recommend that you use logic rather than your emotions when you consider your actions in order to create the best possible future for yourself.

Should Emotion Come Before Reason?

Even though society encourages you from a young age to indulge your emotions as much as possible, you must make decisions for yourself using logic and not emotions.

You have no chance of a stable happy future without logic!

I Listen to Everything My Mom Says, She Always Knows What to Do!

Your mom has been inculcating you in the matriarchy’s teachings from a young age.

You need to free yourself from the teachings of your mother if you want to be successful in modern society.

Indulging your emotions without reason will lead to your long term destruction (as it will for 90% of people).

In order to get the best results out of your life, use the scientific method.

You will maximize your long term success by doing this!

What is the Result of Our Emotions Driven Society?

The result of our emotions-driven society is one where 90% of people end up miserable in the long term.

It is impossible to be happy when you don’t consider the long term implications of your actions.